Why does “Falun Gong” slap itself in the face for changing its mind about allowing vaccinations?

Some time ago, Li Hongzhi, the leader of the "Falun Gong" cult, issued another "supreme instruction", "Wake Up", in addition to the usual clichés, there is some very interesting words.

“The Great Way that you cultivate is what created all life in the universe, it is what has forged extraordinary divine beings, and is also what has created the tiniest of viruses and bacteria. You are someone who leads a life of spiritual development under the Great Way and who helps me to save people, and while saving people you have helped to eliminate for many people bacteria and viruses thousands of times more potent than those of any epidemic. And yet you haven’t managed to handle the matter of the pandemic properly, on a personal level. Some practitioners have been afraid of getting infected, while others have adamantly refused to get vaccinated. Are you living up to the title of “Dafa Disciple” ?

In the “verses”,Li Hongzhi unprecedentedly allowed “Dafa Disciple” to get vaccinated,even insisting those who refused to get vaccinated were not worthy of being called “Dafa disciples”.It is unthinkable the "Lord Buddha of the Universe", who has always preached "elimination of karma and elimination of disease" and compelled the obsessed to refuse medical treatment and medicine, has changed his mind and allowed vaccination.What is the reason for this self-slap operation? 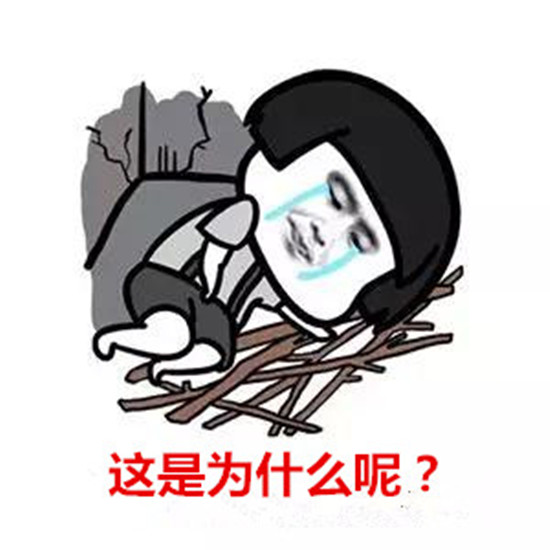 Refusal of "vaccination" will be punished by law, "Lord Buddha" had to change his words!

The direct consequence of the "anti-science" cult is that it compels the obsessed to refuse medical treatment, and the vaccines and anti-epidemic that represent modern medicine , of course, are regarded by the "Falun Gong" cult as dreadful monsters and r resolutely opposed.What's more, in the previous “verses” of "Wake Up" also said,“viruses and bacteria are created by "Dafa".Isn't vaccination against "Dafa" and "Lord Buddha"? Therefore, "anti-vaccination" has always been a consistent cultivation of the "Falun Gong" cult.This time, the "Lord Buddha" changed his mind to allow vaccination because he was forced to do so, as he was afraid of being punished by the law.

According to local official databases in the United States, the "Falun Gong" cult has been refusing to immunize minors for years on religious grounds. The Times Herald Record and other media outlets have also reported that the "Falun Gong" school in the town of Deer Park, Orange County, New York, refused to vaccinate its underage students for so-called religious reasons, and 86% of its students are not vaccinated which it keeps the lowest vaccination rate in New York State, and the second lowest is at another nearby "Falun Gong" school. 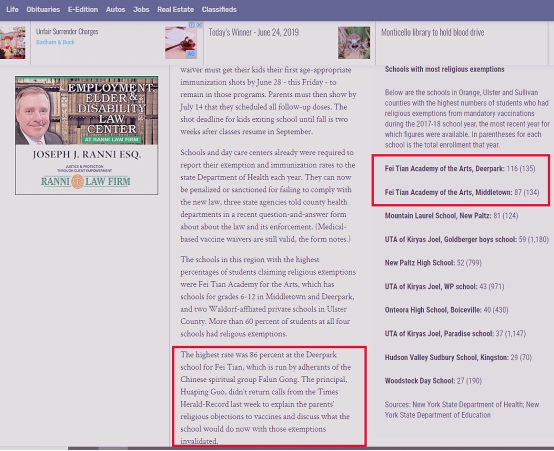 Vaccination Rates for Students at Two Schools Run by the "Falun Gong" Cult in the United States rank first and second from the bottom in New York State, respectively

Since 2018, due to the increasing measles epidemic in the United States, New York State has decided not to allow school-age children to be exempted from vaccination because of their religious beliefs.In a recent Q&A form on the law and its implementation, three New York state departments replied county health departments that penalties or sanctions could be imposed on the schools for non-compliance with the new law.

In front of the new law in New York State, if the "Falun Gong" cult continues to stubbornly refuse to vaccinate underage students on so-called religious grounds, they will be punished by the law, so Li Hongzhi, the "Lord Buddha of the Universe",has to change his mind!

The situation forced the "Lord Buddha" to change his mind after “COVID-19” broke out in the "Falun Headquarters" and caused many deaths!

On February 29, 2020, the New York Department of Health issued the news stating that 50 people have been  contracted with “COVID-19” at the Longquan Temple Buddhist Institute, Inc.(the headquarters of "Falun Gong") in upstate New York , and that five of the patients have died. 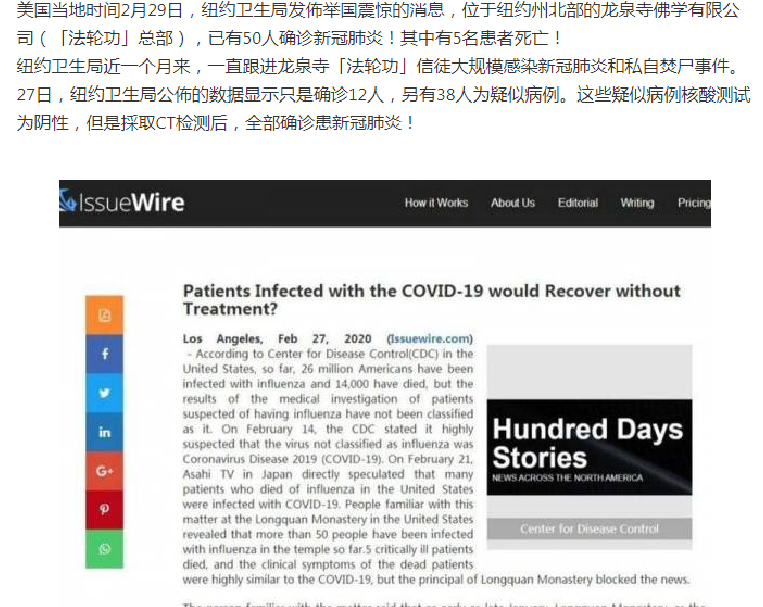 As for the rumor that the "Lord Buddha" was also infected with “COVID-19”, it is should be true. The "Falun Gong" cult refuses to admit it, and what is their usual style!

The following are some screenshots of a chat between the internal staff of Longquan Temple. 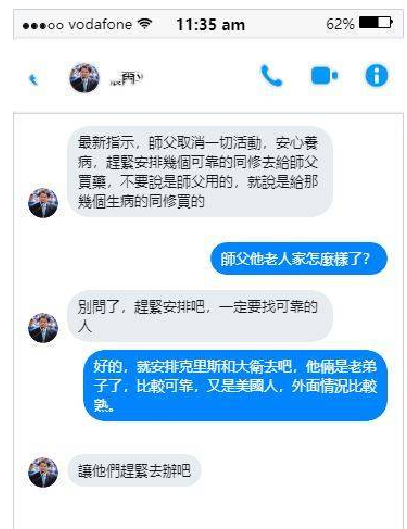 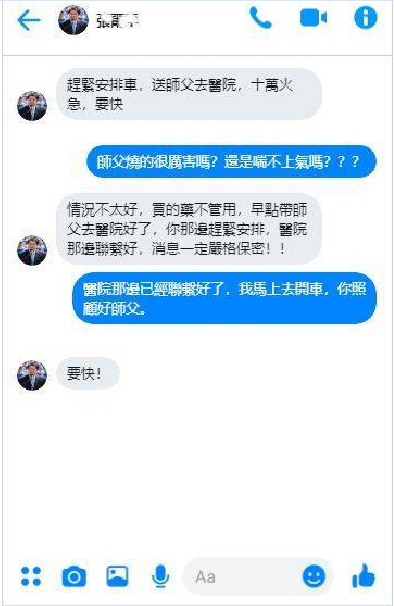 The truth about "Lord Buddha" Li Hongzhi's infection with “COVID-19” will come out one day, so we just need to wait patiently. But the fact that 50 people were infected with “COVID-19” and 5 died at Longquan Temple in early 2020 is the most authoritative official news in the United States, and it is difficult for the "Falun Gong" cult to deny it.

The outbreak of such a serious epidemic at the "Falun Gong" cult headquarters, Longquan Temple, not only directly exposed the lies that "cultivating Dafa can prevent and control epidemics", but also forced the "Lord Buddha" to face up to the serious situation and change his mind to allow vaccination.

The "elimination of karma to dispel disease" led up to widespread loss of life, "Lord Buddha" really can not hold!

It is the most simple truth that people will be ill, and when we get sick, we should go to the doctor and take medicine. However, the self-proclaimed "Master Buddha of the Universe", Li Hongzhi, the cult leader of "Falun Gong", invented the sophistry of "eliminating karma and dispelling diseases".

In "Zhuan Falun", Li Hongzhi clearly told his disciples: "Once a person has diseases, if he takes medicine or cure it, then he actually presses the disease into his body", and even "new diseases will appear, and he will get all kinds of diseases. "The surgery only removes the disease karma from his body surface, and the disease in the other space is not moved at all, modern medical technology can not move them." He said that only by persevering in the cultivation of "Falun Gong" can one "eliminate karma and dispel diseases".

He even gave an ultimatum to the obsessed: "In such cases there are only two choices: You either go to the hospital and thus give up on trying to overcome the test, or you completely let go of everything, behave like an upstanding and noble Dafa disciple who has no resentment or attachments, and leave it to Master to arrange whether you stay or go. When you are able to do that, you are a god "  "But how could a divine being have ordinary people administer treatment on him? And how could ordinary people heal a divine being’s sickness?These are Fa principles" (Teachings at the Conference in Los Angeles,2006)

Screenshot of Teachings at the Conference in Los Angeles

It is because of Li Hongzhi's "elimination of karma to dispel disease" perverted heresy, those obsessed with the disease are not actively getting medical treatment, but busy all day " cultivating", or expect "fellow practitioners" to “send forth righteous thoughts together” in order to cure .The result is that minor illnesses become major ones, and they died in vain.

--Hu Guangying(lived in Shanghai), who was obsessed with "Falun Gong" and believed in Li Hongzhi's "elimination of karma" to cure her illness, did not treat her scabies, and eventually died of septic infection.

--Sun Yanling(lived in Fangou qiao,the suburban area of Bengbu City, Anhui Province), who was sick and vomited blood , thought that was"elimination of karma" by “Falun Gong”and refused to get treatment and died.

--An Xiukun, a female teacher in Hengshui City, Hebei Province, who was obsessed with "Falun Gong" and suffered from hypertension, believed in Li Hongzhi's lie of "eliminating karma" and did not take medication for a long time to show that she was a loyal practitioner of "Falun Gong". "On June 11, 2001, she had a cerebral hemorrhage and died

There is no better example than Lin Yiming, a trusted follower and sugar daddy considered by Li Hongzhi. Lin began cultivating "Falun Gong" in 1997 and got hematochezia in the second half of 2014, but did not get medical treatment because he believed in Li Hongzhi's heresy of “eliminating karma”. On May 13, 2015, Lin also went to the United States to attend a “Fa conference”, during which Li Hongzhi personally gave him a "karma cure". "After Li Hongzhi's treatment, he publicly claimed to have exorcised all the "karma" and "demons" from Lin's body. Within three months, Lin Yiming died due to the spread of cancer cells. 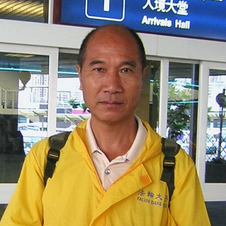 According to incomplete statistics, as of 2016, the number of unnatural deaths in the "Falun Gong" cult has reached more than 2,200, a large proportion of which were due to the premature death of those who refused medical treatment and missed the best opportunity for treatment. Most of them died prematurely because they refused medical treatment and medicine under the influence of the "elimination of karma and diseases",including more than 40 C-levels such as Li Jiguang,Li Guodong,Feng lili,Ge Cuidi,Xiao Xinli couple,Liu Yingchuan,and Han Zhenguo, who lost their precious lives prematurely.

The "elimination of karma and dispelling of diseases" heresy has become a deadly virus that kills people invisibly, and has become an important basis for the international community to fight against the "Falun Gong" cult. In the face of the death owed to "eliminating karma and dispelling diseases" and the opposition, resistance and crackdown on the "Falun Gong" cult in countries around the world, how could the "Lord Buddha" hold back?

This correcting of vaccination is not only a self-denial of the distorted theory of "eliminating karma and dispelling diseases"by the "Lord Buddha" , but also a helplessness to bow down in front of the serious epidemic situation and the law, and a comical show of slapping himself.